September 15, 2014
Air Pollution – Breathe Easy – The Pollution Solution (1)
Informational advertisement video from the Delhi-based company BreatheEasy.
“As air pollution in our cities is growing and 13 of the top 20 MOST polluted cities of the world happen to be in India, this video will help you understand the issues of air pollution.”

NASA satellite image: A River of Haze, image of the day January 2013 (the Indo-Gangetic Plain) 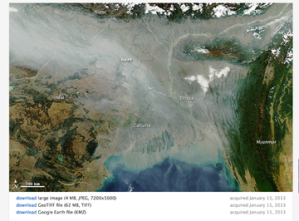 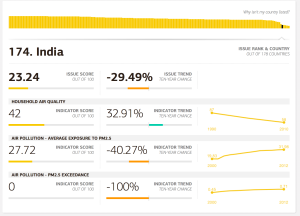 For more maps from WHO: http://gamapserver.who.int/mapLibrary/app/searchResults.aspx

From The Center for Science and the Environment:
Presentation:  Health Effects of Air Pollution
Dr.Manas Ranjan Ray, The National Cancer Institute, Kolkata (2013)

Presentation: Black Carbon, a presentation by Amunita Rowchowdhury, Center for Science and the Environment, 2012

Urbanemissions. Blogspot “The Daily Does of Air Pollution”
Infographic: comparing air pollution and action in Beijing and Delhi