As South Asians gasp for breath, governments sit on their hands: The Economist

“THROUGHOUT its steep climb away from Delhi, the plane remained enveloped in an acrid fug. It was not until it reached cruising altitude that sunlight could break through. Off to the north, tickling an achingly blue sky, the pristine pinnacles of the Himalayas whispered a promise of fresh air. But as the aircraft crested the lip of the jagged bowl that cradles Kathmandu, the fabled capital of Nepal looked less like Shangri-La than like a giant curdled cappuccino. The plane descended into a yellow-brown smear that stretched clear across the valley, thick enough at the centre to blur away streets and buildings entirely.”
The Economist 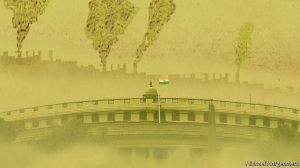 Read it on Delhiair.org:
As South Asians gasp for breath, governments sit on their hands