“EVEN THOUGH almost a year has passed since the Graded Response Action Plan to combat air pollution was put in place, a robust mechanism to measure air quality across NCR towns in Haryana and Uttar Pradesh is still incomplete. The action plan, formulated by the Supreme Court-appointed Environment Pollution (Prevention and Control) Authority (EPCA) last December, hinges on accurate air quality data from Delhi-NCR towns to suggest actions according to the concentration of pollutants. However, several stations in Haryana and Uttar Pradesh are yet to come up.

While the Central Pollution Control Board (CPCB) has added towns such as Alwar, Bhiwadi, Ghaziabad and Noida to its daily air quality bulletin over the past year, the number of stations is still less as compared to Delhi, 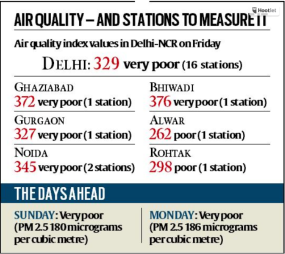 where 20 more stations have been activated over the past year.

Ghaziabad, which has been consistently topping the list of the most polluted towns in the regions for the past several months — as per CPCB data — has only one monitoring station so far.

Gurgaon, too, has only one monitoring station, with the second one expected to start functioning by next week. Noida, meanwhile, continues to read air quality from only two stations…” The Indian Express. Read the full article on Delhiair.org.

Death by breath: In pollution fight, not enough air quality stations in NCR