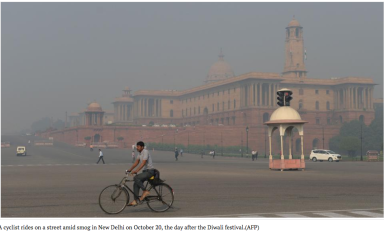 “Delhi’s air quality transitioned from “severe” to “poor” in three days after Diwali, going from 403 on Friday to 300 on Monday. It took 26 days for the air to get cleaner after Diwali in 2016. Experts predict that the conditions might only get better this week.

Delhi could breathe easier this year as a post-Diwali toxic haze cleared up much faster than it did in 2015 and 2016 because of favourable weather conditions and pre-emptive steps to reduce air pollution, experts said.

The city of more than 20 million people suffered its worst smog in nearly two decades after Diwali last year and it took at least 26 days for the air quality to improve from “severe” to “poor”. This transition from “severe” to “poor” had taken five days in 2015 but the relief was short-lived because the air quality turned “very poor” 24 hours later, and stayed in that zone for nearly 18 days.

This year, the Delhi air improved to “poor” in three days after Diwali, going from 403 on Friday to 300 on Monday. Experts predict that the conditions might only get better this week.A key factor that has worked for Delhi is a favourable wind that blew away the filth in the air…”

…”What helped the city this year, in addition to the weather, were a court ban on the sale of firecrackers, implementation of a graded response action plan, and a crackdown on burning of crop residue in neighbouring states helped cut pollution, experts said.

The Punjab government has already imposed fines of ₹15.99 lakh for stubble burning in 2017. Last year, fines of only around ₹6 lakh were collected in the entire season. “The laxity was mainly because of the assembly elections in the state. With barely months to go for the polls, the government didn’t want to antagonise farmers,” alleged an environment official.

The ban on firecrackers, too, made a huge difference, according to experts.

“As the supply of firecrackers was cut off, the bursting was restricted to just one day, and that too for a few hours. It could have been worse had the ban not been enforced,” said Anumita Roychowdhury, executive director (research and advocacy) at the Centre for Science and Environment.” Hindustan Times. Read it on Delhiair.org.