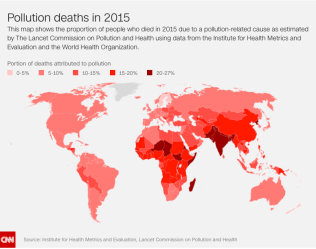 The fatal effects of pollution are seen across our planet.

In 2015, nearly one in six deaths, an estimated nine million worldwide, was related to pollution in some form — air, water, soil, chemical or occupational pollution, according to a new report published Thursday in The Lancet.
Air pollution is by far the largest contributor to early death, according to the new research produced by The Lancet Commission on Pollution and Health. This form of pollution is linked to 6.5 million fatalities in 2015.
Water pollution, responsible for 1.8 million deaths, and workplace-related pollution, which led to 0.8 million deaths, pose the next largest risks, the report noted.
The overwhelming majority of pollution-related casualties — 92% — occur among people living in low- and middle-income countries. And, one in every four early deaths in nations trying to industrialize rapidly — such as India, Pakistan, China, Bangladesh, Madagascar and Kenya — could be connected to filthy air, water, soil or other contamination.
“Pollution disproportionately impacts the poor and the vulnerable,” said Dr. Olusoji Adeyi, a commissioner and director of the health, nutrition and population global practice at the World Bank Group.
In countries at every income level, disease caused by pollution is most prevalent among minorities and the marginalized.” CNN. October 20, 2017.