Delhi’s Residents Choke on the Air They Breathe as Pollution Levels Reach an All-Time High: Newsweek

“The city of Delhi is choking, and there’s no end—or much else—in sight. Although residents of the Indian capital are used to polluted air, particularly in the cooler months, when people light their stoves for heat, this winter it reached a level that stunned even Delhiites. In November, after six days of heavy smog smothered the city, the Indian government declared an emergency, temporarily closing schools, construction sites and coal-fired power stations. The hashtag #MyRightToBreathe trended on Twitter, as citizens called for more government action.” Newsweek 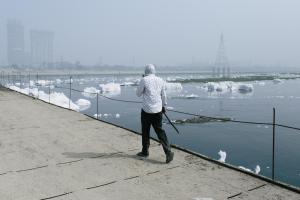 Read it on Delhi.org:
Delhi’s Residents Choke on the Air They Breathe as Pollution Levels Reach an All-Time High