Not sure data in foreign reports on air pollution deaths: Environment Minister: The Indian Express

“EVEN AS he acknowledged that the health impacts of air pollution were “real” and “dangerous”, Environment Minister Anil Madhav Dave on Friday contested some of the numbers presented in a new global report, which has identified 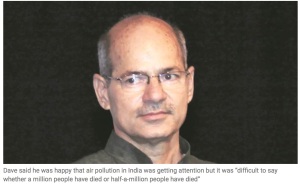 India as the worst affected country and attributed more than a million deaths in the country in 2015 to air pollution. Dave said he was happy that air pollution in India was getting attention but it was “difficult to say whether a million people have died or half-a-million people have died”. He said he would rather believe research conducted by Indian institutions to establish numbers like these.” The Indian Express

Read it on Delhiair.org:
Not sure data in foreign reports on air pollution deaths: Environment Minister