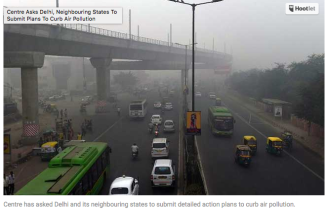 “While reviewing the measures being taken to improve the air quality in the national capital, the centre on Tuesday asked Delhi and its neighbouring states to submit detailed action plans to curb the air pollution.

The National Capital Region Planning Board (NCRPB) will soon file an affidavit in this regard before the High Court of Delhi, an official statement said.

The Minister also asked Delhi, Rajasthan, Punjab, Haryana and Uttar Pradesh to increase forest cover in the National Capital Region to 20 per cent of the total geographical area from the present cover of only 3.30 per cent (as in 2012).

Mr Naidu directed the states to increase the green cover through conservation of entire Aravalli range and its foothills spread in Delhi, Haryana and Rajasthan through afforestation up to appropriate extent for ground water recharge.

Delhi considers a land parcel of one hectare as forest if it has 100 natural grown trees.

In the meeting, the Central Pollution Control Board informed that an action plan has been prepared under the directions of the Supreme Court in the context of high levels of air pollution in Delhi in November this year.

The Indian Institute of Technology’s (IIT) study recommends management of the burning of stubble, municipal waste and local biomass. It also recommends retrofitting of Diesel Particulate Filters and implementation of Bharat Stage Standard Emission-6 (BS-6) for all diesel vehicles and promotion of Electric/Hybrid vehicles.

The study says that all the industries, within 300 km radius of Delhi, should reduce the sulphur content in fuel and 9,000 hotels and restaurants in Delhi should stop the use of coal.

The Board also discussed 14 inter-state connectivity links, including Kalindi by-pass road from Ashram Chowk to Faridabad by-pass; Mehrauli-Gurgaon Road which would ease traffic on NH-8, and connecting Nelson Mandela T-Point at Vasant Kunj with the existing Gurgaon-Mehrauli Road, with the aim of facilitating seamless travel in the Region.