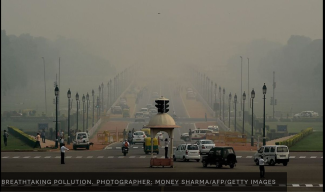 This week, air pollution in New Delhi has been truly off the charts: Tiny particulates, which are especially deadly, topped 999 micrograms per cubic meter — 40 times what is considered safe and beyond what the scale was designed to measure. While air quality tends to worsen around this time of year as millions of Indians light firecrackers to celebrate the Diwali festival, the problem isn’t limited by season or geography. India has 13 of the 20 most polluted cities in the world, according to the World Health Organization. Every year, more than half a million people are estimated to die prematurely because of air pollution.

A growing outcry has forced some improvements. The national government has agreed to speed the adoption of tougher vehicle emissions standards, making them mandatory by 2020. The Indian Supreme Court has been especially active, doubling the fees for commercial trucks entering Delhi and ordering the capital’s taxis to switch from highly polluting diesel to compressed natural gas. Bans on burning garbage and agricultural waste are in place, and fines are being levied for spreading construction dust. Yet many regulations are ignored or poorly enforced. Delhi’s government, which promised to buy another 2,000 clean buses for its fleet this year, has managed to add only four.

A much bigger and more coordinated effort is required, focusing on four broad areas. First: cars. Even as vehicle ownership numbers skyrocket, most Indians still walk, cycle or use public transport to get around. To keep the balance from shifting, the country needs to rethink its existing car-centric policies. More investment is needed in buses and commuter rail lines. And to make driving more expensive, cities should raise parking fees, impose traffic-congestion charges and perhaps even institute an auction system like Singapore’s that imposes a cost on every car. (Court-imposed fees have already reduced truck traffic in Delhi.) Urban areas need more walking and cycling paths, and the government must do more to encourage the shift of freight from roads to railways and waterways.

Cars aren’t the only source of air pollution in India, however. Soil and road dust, kicked up by traffic and construction, do at least as much to foul the air in places like Delhi. Construction companies that fail to minimize dust levels need to be fined aggressively, and cities need to invest in vacuum sweepers to clean roads frequently. Where possible, streets should be paved “wall to wall,” eliminating dusty and debris-filled roadsides.

A third promising approach to cleaning the air is to adopt new technologies that can cut down on harmful emissions. The government needs to enforce rather than relax deadlines for cutting pollution from coal-fired power plants. In other cases, financial incentives may be needed: Rural women should be compensated for switching to cleaner-burning cook stoves, and brick makers for adopting more advanced kilns. Farmers who now burn agricultural stubble need both financial and technical help to instead gather up that waste and convert it to energy.

Finally, the government should redouble its efforts to combat climate change, which will naturally slash not just greenhouse-gas emissions but particulates as well. It’s essential that India pare back plans to build new coal-fired power plants — and plan on using less-expensive solar instead in the years ahead. Fledgling emissions trading schemes that are being tested in three Indian industrial clusters should be expanded nationwide. Measures to promote energy conservation deserve support, too: By one estimate, more efficient air conditioners could eliminate as much air pollution as is produced by more than 60 power plants.

In confronting its air quality crisis, India has several advantages over China: independent courts, a free media and thriving environmental watchdogs. And because India is at an earlier stage of development, it has a chance to avoid some of the mistakes its larger neighbor made in the headlong rush to grow. China, for its part, benefits from having the focus and political will to tackle the problem. This is where India should be looking to catch up.” Bloomberg (Editorial Board). Read it on delhiair.org.