Clear the air for children: The impact of air pollution on children : UNICEF Report 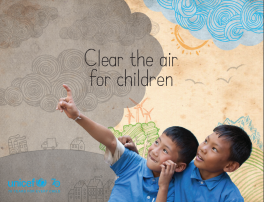 “…It causes miscarriages, early delivery, and low birth weight.
It contributes to diseases that account for almost 1 in 10 of all deaths of children under the age of five.  It can harm the healthy development of children’s brains. It is a drag on economies and societies, already costing as much as 0.3 per cent of global GDP – and rising.  And in many parts of the world, it is getting worse. ‘It’ is air pollution. And as both this litany and this report show, the magnitude of the danger it poses – especially to young children – is enormous….” 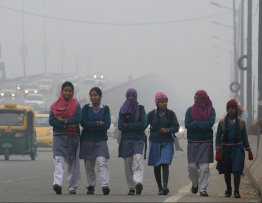 “The impact is commensurately shocking. Every year, nearly 600,000 children under the age of five die from diseases caused or exacerbated by the effects of indoor and outdoor air pollution. Millions more suffer from respiratory diseases that diminish their resilience and affect their physical and cognitive development.” Anthony Lake, Executive Director, UNICEF

This October 2016 UNICEF Report on the damage of toxic air quality on the health of children provides details of the unique vulnerabilities of children, “due both to their physiology as well as to the type and degree of their exposure.” According to the Report’s Executive Summary

Clear the air for children: The impact of air pollution on children