“A World Bank study shows that welfare costs and lost labour income due to air pollution amounted to 8.5% of India’s GDP in 2013.” 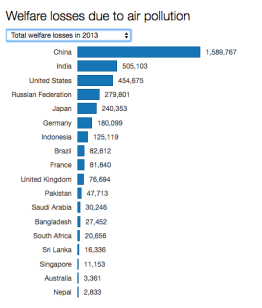 “Measures to safeguard the environment are often considered to be economic spoilers as they entail putting restrictions on economic activity such as shutting a polluting factory or scrapping old vehicles. What is not taken into account while making these calculations is the cost imposed on people living in regions where pollution and environmental degradation is higher.

The cost of air pollution: strengthening the economic case for action, a joint study by World Bank and University of Washington, released on Thursday, might be useful in dispelling such a blinkered view on costs of controlling pollution.

According to the report, total welfare losses between 1990 and 2013 because of premature deaths from air pollution increased by 94%. Of this, damages from ambient PM 2.5 air pollution rose by 63% during this period to $3.5 trillion, while damages from household air pollution from cooking with solid fuels jumped almost four-fold to $1.5 trillion, adjusted to the purchasing power parity (PPP) in 2011.

In terms of welfare losses because of air pollution, India ranks second after China at $505.1 billion, or 7.69% of its gross domestic product (GDP), in 2013. Premature deaths

due to air pollution in 2013 cost the global economy about $225 billion in lost labour income, or about $5.11 trillion in welfare losses, worldwide, according to the report.

Adding welfare costs and costs of lost labour due to air pollution puts India’s GDP loss at more than 8.5% in 2013. India’s GDP growth at constant prices was less than 7% in 2013-14. So air pollution alone might be offsetting the Indian economy’s growth efforts.

As is to be expected, increasing air pollution also entails large-scale suffering. The report ranks air pollution as the fourth biggest fatal risk factor in the world. Air pollution kills more people than tobacco, alcohol or drug use or unsafe sex in most countries. At 10.1% of total deaths globally, air pollution ranked fourth among the leading fatal health risks after metabolic risks, dietary risks and tobacco smoke.

For poorer countries, the impact of bad air quality has been worse. Low- and middle-income countries account for 93% of the deaths and non-fatal illness each year from air pollution. India and China also accounted for the highest number of deaths due to air pollution in 2013. But while China reported an increase of only 7% between 1990 and 2013, deaths due to air pollution in India during the same period increased by 34.5%…” Live Mint. Read the full article on delhiair.org.