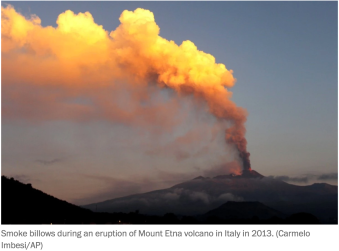 “Scientists may have significantly underestimated a dangerous source of pollution in the atmosphere, new research suggests. A satellite study, published Monday in the journal Nature Geoscience, has revealed nearly 40 previously unreported major sources of sulfur dioxide emissions — a pollutant that can cause multiple harmful health and environmental impacts and even impact the climate in certain ways, typically by temporarily reducing the effects of global warming.

“Sulfur dioxide pollution can come from a variety of sources, both natural and industrial, including volcanoes, oil refineries and the burning of fossil fuels. Although it has a relatively short lifespan in the atmosphere — a few hours to a few days — it’s important for scientists to keep track of its presence to help inform air quality and climate models and create pollution-cutting policies. Until now, scientists have mostly relied on emissions inventories drawing on national reports to identify the world’s sulfur dioxide sources and the amount of pollution they’re putting out. Satellite information has been able to help scientists further quantify sulfur dioxide emissions — but this method has mostly been useful when the scientists already know where the emissions are coming from. That’s because winds can help obscure sulfur dioxide hotspots, making it difficult to pick them out if their location isn’t already known.

“But in the new study, researchers from Canada’s environment and climate change department and other institutions in the United States and Canada have described a new method that allows them to identify and map sulfur dioxide sources all over the world — including sources that may not have been previously identified or reported. And they’ve found that anywhere from 7 to 14 million metric tons of sulfur dioxide may be missing from global inventories each year.

“…They  [the researchers] identified nearly 500 major sources of sulfur dioxide emissions, 75 of which were volcanic, and therefore natural, sources. Out of the remaining, human-caused sources, 39 could not be matched to any of the sources already identified in the inventories. Of these 39 “missing” sources, there was a significant cluster in the Middle East. Fourteen were located there, and 12 of those corresponded with oil and gas operations, such as oil refineries. The rest of the missing locations were spread across the world, including Asia, Africa, Europe and the Americas, and corresponded largely with power plants…” The Washington Post. Read it on delhiair.org.