How are cities around the world tackling air pollution? The Guardian 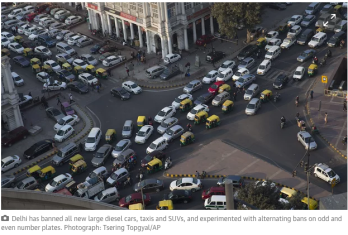 transport and car bans – cities from Delhi to Zurich are using a range of initiatives to lower traffic pollution and improve health.” Read about initiatives being taken in Indian cities and other capitals and cities around the world.

“Delhi – Reports that pollution levels in Delhi matched those in Beijing spurred the city to ban all new large diesel cars and SUVs with engines of more than 2,000CC and to phase out tens of thousands of diesel taxis. The city has experimented with alternately banning cars with odd and even number plates and is now encouraging Uber-style minibuses on demand. Other cities considering diesel bans are Dublin and Brussels.”

The Indian city is converting its 6,000 buses to compressed natural gas and discouraging the car. So far, says the city, it has reduced traffic pollution by about 20% in a few years and one in four people who used to travel by car now use public transport.” The Guardian. Read it on delhiair.org.

How are cities around the world tackling air pollution?