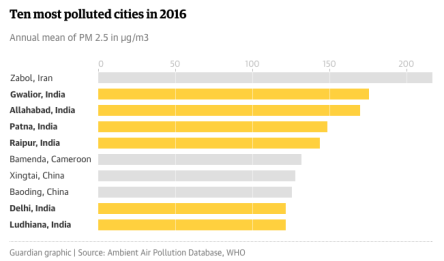 Environmental campaigners in India have called for the government to implement a “stringent, time-bound” plan to curb air pollution in cities, as a new World Health Organisation report suggests that six of the 10 most polluted cities in the world are in India. The report, which contains data from 795 cities in 67 countries between 2008 and 2013, shows Indian cities have some of the highest concentrations of particulate pollution, which can cause fatal damage to the heart and lungs.According to the WHO, air pollution is currently the greatest environmental risk to public health and causes about 3 million premature deaths globally every year.

Six Indian cities – Gwalior, Allahabad, Patna, Raipur, Ludhiana, and Delhi – rank among the most polluted cities in the world.The report suggests millions of people in India are at risk of serious cardiac and respiratory infections and diseases because of high pollution levels. Indian environmental activists condemned Narendra Modi’s government for inaction over pollution. Sunil Dahiya, a campaigner from Greenpeace India, said air pollution levels had spiked in recent years. “The government has to give up the fossil fuel-based energy and look for cleaner forms of energy, such as renewables,” he said.“Pollution levels have increased since the last WHO report in 2014, and the government must take it seriously. Right now, no one is really accountable for air pollution in the government. “They need to make a systematic, comprehensive, and time-bound plan on a national and regional level.” The Guardian. Read it on delhiair.org.