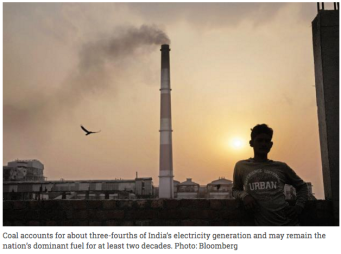 “India plans to shut aging coal-fired power plants with a combined capacity of 37 gigawatts to cut emissions and reduce the use of fuel and water. The plants are more than 25 years old and have turned uneconomical, said S.D. Dubey, chairman of the Central Electricity Authority, the planning wing of the power ministry. They will be replaced by super-critical units, which are more efficient, at the same sites, he said, without giving a timeline.

“Our first concern is emissions,” Dubey said in New Delhi. “We also want plants to be more efficient in use of resources.” The plan reflects Prime Minister Narendra Modi’s attempt to balance energy security with the need to protect the environment. Coal, whose use is declining in several parts of the world because of emission concerns, accounts for about three-fourths of India’s electricity generation and will probably remain the nation’s dominant fuel for at least two decades, the government estimates.

“…Coal fires 62% of India’s 298 gigawatts generation capacity, according to the government’s data. The aging plants being considered for a shutdown account for about 12% of the country’s total capacity. ” Live Mint. Read it on delhiair.org.