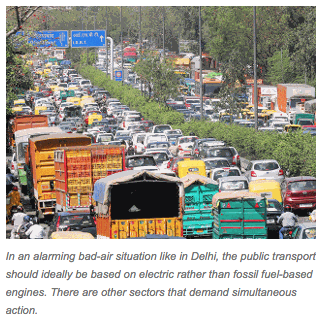 They write, “…The air pollution issue in Delhi cannot be expected to be solved by looking at the city in isolation and taking remedial actions just within its boundaries. Modelling studies at the Energy and Resources Institute (TERI) have suggested that the whole Indo-Gangetic plain is heavily polluted by particulate matter and the NCR is one of the hotspots. There are over 13 million vehicles in the NCR, with more than 8 million in Delhi itself.

“While cars have shifted to advanced BS-IV emission norms in 2010, most heavy vehicles have remained at BS-III due to their requirements to move out of NCR where BS-IV quality fuel is not available. It is now heartening to see that the government has decided to move to the most advanced vehicular standards (BS-VI norms) on a pan-India basis by 2020. The options of retrofitting and fleet modernisation need to be explored with the introduction of low sulphur fuel in India by 2019, to reduce pollution.

“In an alarming bad-air situation like in Delhi, the public transport should ideally be based on electric rather than fossil fuel-based engines. There are other sectors that demand simultaneous action. While diesel engines in vehicles are being talked about so much, the diesel generators using similar technologies are generally neglected. These are in use for many hours of the day in the adjoining towns of Delhi, where power supply is a major issue.” The Economic Times. Read it on delhiair.org.