Will Delhi’s Extreme Traffic Restrictions Have an Impact on Air Pollution This Time? The Wall Street Journal 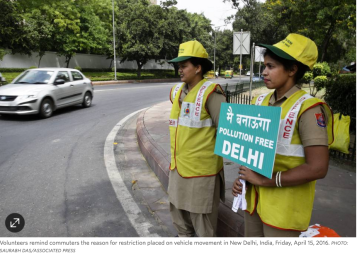 “Delhi has implemented severe restrictions on which cars are allowed on the road again in hopes of combating the megacity’s horrendous air-pollution problem. Similar air-clearing measures had mixed results during the peak Winter smog season but this time citizens are hoping for better results.

For the first few days of the plan most offices and schools were closed for a string of national holidays and the weekend, so Monday is the true test of whether the restrictions are working.” The Wall Street Journal. Read it on delhiair.org.

Will Delhi’s Extreme Traffic Restrictions Have an Impact on Air Pollution This Time?