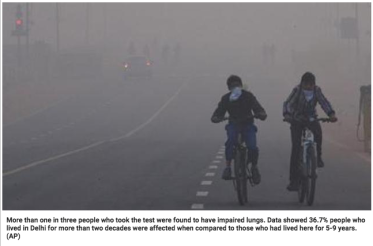 “Breathing in Delhi air is worse than smoking, according to a Delhi government report. Cases of lung impairment — or lung capacity of less than 70% — increased with the number of years spent in Delhi, but smoking had no effect. At 34.5%, the risk of impaired lungs was the same for smokers and non-smokers.

“Ten vans deputed by the Delhi government — in collaboration with Maulana Azad Medical College —performed spirometry tests on more than 3,000 people between January 1 and 15 across the city.

“A score of 90% on the test is ideal. But, if the score goes below 70%, the lung function of a person is said to be impaired. More than one in three people who took the test were found to have impaired lungs. Data showed 36.7% people who lived in Delhi for more than two decades were affected when compared to those who had lived here for 5-9 years.
Lung impairment went up with age, with 17.5% of people below the age of 20 affected compared to 41.9% of people between ages 41 and 50, the report said.” Hindustan Times. Read it on delhiair.org.