Delhi’s air not worst in India: CPCB data: The Times of India

“The capital lost a dubious crown on Friday with the country’s pollution watchdog saying it is not India’s most polluted city, perhaps not even the second worst. But Central Pollution Control Board’s (CPCB) data for the September 2015-January 2016 period clearly shows that Delhi’s air is far from healthy. 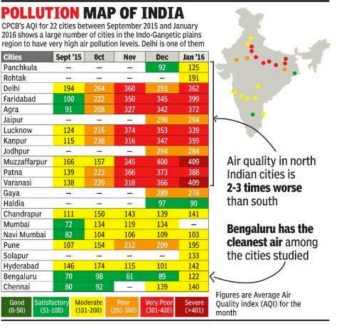 “CPCB has published air quality indices (AQI) for 24 cities that help in comparing pollution levels at a glance with a colour code and a numerical value. In India, AQIs are determined based on the concentrations of seven pollutants, including PM2.5 (fine, respirable particles), sulphur dioxide (SO2), nitrogen dioxide (NO2) and carbon monoxide (CO).

“Although the AQIs will draw attention to the problem of air pollution in smaller cities, experts say the indices are at best indicative because in most cities CPCB has very few monitoring stations, and sometimes these are out of order. For instance, Muzaffarpur, Gaya, Faridabad and Varanasi have only one station each.

“Centre for Science and Environment’s analysis of Delhi Pollution Control Committee’s (DPCC) real-time monitoring data for December shows the capital had 23 severe air quality days although CPCB says there were none. “We have to factor in that many CPCB stations are in background areas or less polluted locations,” CSE said.” The Times of India. Read it on delhiair.org.