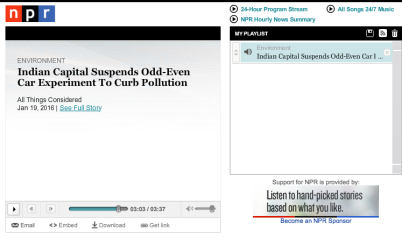 Listen to NPR’s Julie McCarthy discuss the impact of odd-even on Delhi traffic and pollution, and the government’s longer-term plan to implement a phase two of the program. “The impact of odd-even is a matter of debate,” says McCarthy who notes that the studies and data on the reduction in air pollution during the scheme are inconsistent. Nonetheless, it was “the number one topic of conversation” among the public. ”

When asked why if the program was so successful is the government putting the program on hold until May or June, Ms. McCarthy responds, “There is not the kind of urgency in Delhi as there is in cities like Beijing, even though Delhi is more polluted according to the World Health Organization, there’s been an apathy here and a slowness to grasp the magnitude of the health problems.” With increased public interest, she furthers, the local authorities are looking to “fine tune” the program before it gets reinstated…. NPR.  Listen to the full story on delhiair.org.