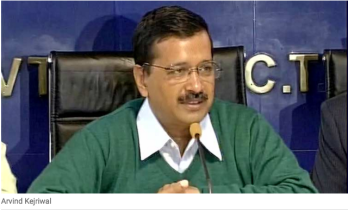 “Delhi Chief Minister Arvind Kejriwal on Friday thanked people, media and judiciary for an ‘overwhelming response’ to the Odd-Even scheme and said that pollution level down during the 15-day period.

Thanking the people, police and government of Delhi for their role in implementing the 15-day odd-even drive to curb vehicular pollution that ended on Friday, Chief Minister Arvind Kejriwal said the administration would re-introduce the scheme in an “improved form”. In a tweet on Friday night, Kejriwal wrote: “Proud of u Delhi. U give me confidence ‘Together, we can achieve anything’. 1st phase of Odd Even ends today. Will do again in improved form.”

…Kejriwal added, “Pollution did decline but the most visible effect (of odd-even) was the decongestion of roads. Roads were empty and travel time was halved. This gave people more time to live their lives. There were no more traffic jams to irritate them. Many people are saying this should continue. They are ready to put up with the inconveniences.”  The Indian Express. Read it on delhiair.org.