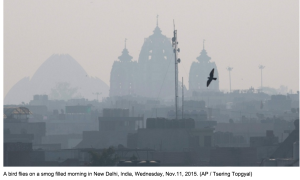 “…India, the world’s third-largest climate polluting nation, has spent decades encouraging cleaner cooking technologies, with limited success. Such a shift would have little impact on India’s emissions of climate-warming greenhouse gases, and many of the alternatives pollute as well. …But countries like India – far behind the industrialized world in economic and infrastructure development – argue that it’s a crucial step in saving lives and ensuring energy justice for the poor.”

“…Pure black carbon is a significant climate pollutant, with some studies suggesting it is responsible for up to 20 per cent of climate change. It is also a major component of the tiny particulate matter known as PM2.5 that is now one of the most common measures for air pollution. About a quarter of the world’s black carbon pollution comes from cookstoves, with the rest released by car exhaust, forest fires, agricultural burning and other sources. The soot is blackening glaciers and polar ice so that they absorb more solar radiation and melt more quickly. It’s creating hazy layers in the atmosphere that block sunshine from reaching the Earth, a phenomenon called “global dimming” that can harm crops. And it messes with the weather by interacting with clouds in complex ways…” CTV (Canadian TV – AP). Read it on delhiair.org.