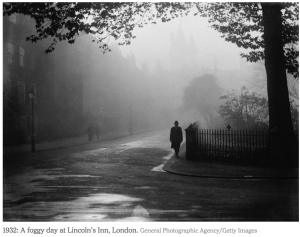 “In January, researchers at King’s College London announced that pollution levels on Oxford Street, in central London, had exceeded limits set for the entire year in just the first four days of 2015. Similarly alarming numbers have been recorded for other streets in the city — and yet the mayor, Boris Johnson, has delayed implementation of stricter air-quality measures until 2020. What’s happening in London is being played out in cities worldwide, as efforts to curtail the onslaught of air pollution are stymied by short-term vested interests, with potentially disastrous results…” by Christine L. Corton, senior member of Wolfson College, Cambridge University and the author of “London Fog: A Biography.” Read it on delhiair.org.

The Return of London’s Fog