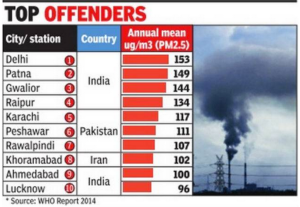 “The latest World Bank report on leveraging urbanisation in South Asia has identified “air pollution” as a big challenge for major cities in the region, including Delhi. While Delhi is the worst among 381 cities from developing countries, 19 of the 20 most polluted cities are from South Asia, the report said quoting the recent findings of World Health Organisation report on ambient air pollution. The report also mentions how for the “very poorest in Bangladesh, India, Nepal and Pakistan, under-five mortality is higher in urban areas than in rural settings”

…”It said [the report] given the lack of availability of and access to clean public transport in India, one can speculate that, for any given increase in demand for mobility associated with a given increase in population density , more air pollution will occur there than elsewhere.” The Times of India. Read it on delhiair.org.
Delhi’s air worst among 381 cities: World Bank