“Cases are up 30% since 2010 in country where decline in air quality is shifting from acute to chronic in more than just Delhi.” 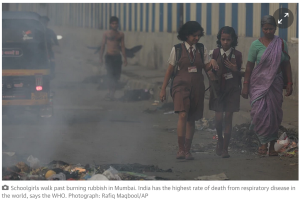 “A sharp rise in cases of chest and throat disease in India is being blamed by doctors on worsening air pollution in the country, which is now home to 13 of the 20 most polluted cities in the world. According to India’s National Health Profile 2015, there were almost 3.5m reported cases of acute respiratory infection (ARI) last year, a 140,000 increase on the previous year and a 30% increase since 2010….The rise has occurred despite steady improvements in medical care and nutrition, as well as a shift away from using wood as fuel in rural areas. Together this has mitigated many factors long blamed for the high levels of respiratory diseases in India. Doctors are blaming the increasing severity of the problem on unprecedented decline in air quality across India.
The Guardian. Read the full article on delhiair.org.