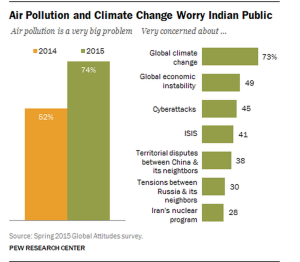 affecting the country, Prime Minister Modi and national institutions. It is based on 2,452 face-toface interviews with adults 18 and older conducted from April 6 to May 19, 2015.”

See Excerpts below from the Full Report on Air Pollution issue
“…Despite widespread satisfaction with their economy, their institutions and Modi, Indians nonetheless believe they face a range of very serious problems. And, in some cases, their concern is on the rise.
“…There has also been a 22-point increase in worry about air pollution: 74% say it is a very big problem, up from 52% who said the same a year ago. This jump in concern may reflect growing evidence of the poor air quality in Indian urban areas. A 2014 World Health Organization study found that India was home to 13 of the 20 cities around the world with the most-polluted air. Nevertheless, anxiety about air pollution is a sentiment shared nationwide: Urban and rural Indians are equally concerned. However, BJP (77%) supporters are far
more worried about air quality than AAP backers (57%). “ Pew Research Center (Global Attitudes and Trends) by Brian Stokes. Read it on delhiair.org.