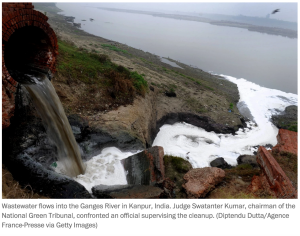 Under the chairmanship of Judge Swatanter Kumar India’s National Green Tribunal, “has become a major arbiter in some of the most pivotal environmental battles in India since being established five years ago.”

“The green court, known for its speed in a judicial system that otherwise moves at a glacial pace, has taken on more than 10,000 cases since its inception, weighing in on air pollution, trash collection, mining, toxic dumps and dam projects. It has resolved about two-thirds of the cases…The National Green Tribunal’s widening influence comes at a time when Prime Minister Narendra Modi is trying to ease the cumbersome process of environmental approvals to attract more investment, an effort that has led to clashes between the government and the judiciary.

…”In recent months, the National Green Tribunal has been pitted against the government in an epic battle to clean New Delhi’s air, which a 2014 World Health Organization report deemed the dirtiest in the world. A petition to improve the air quality has ballooned into a high-profile trial that could test the limits of the court’s power.” The Washington Post. Read the full article on delhiair.org.