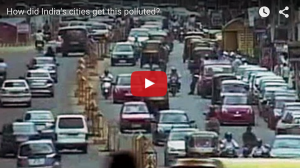 Authors Rohini Pande, Robert Rosenbaum and Kevin Rowe laud India’s current “ambitious” energy and environmental policy agenda but warn that “without a similarly ambitious effort to step up implementation across the environmental regulatory system, they are likely to join an unfortunately long list of solutions that looked good on paper but have yet to succeed in practice.”

They explain that one of the reasons why “India’s environmental laws fail to deliver the air quality improvements they promised” is because  “environmental regulators are forced to overcome persistent deficits of information and authority in order to enforce these laws”….Government agencies that enforce India’s Air and Water acts have only 200-300 technical staff to monitor at least 50,000 plants in some of the largest and most industrialized states.” Because enforcement is so difficult, they suggest that electronic monitoring equipment be placed on factory smokestacks and power plants. “Convincing plants to turn on their pollution control equipment may be one of the quickest and cheapest ways to reduce pollution across India.”  Fair Observer. Read it on delhiair.org.