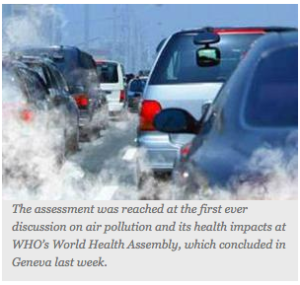 “Air pollution is the world’s biggest environmental health risk, causing at least one in eight deaths around the globe, the World Health Organization has said. The assessment was reached at the first ever discussion on air pollution and its health impacts at WHO’s World Health Assembly, which concluded in Geneva last week. Delegates at the assembly adopted a resolution to address the health impacts of air pollution. The new estimation significantly increases the threat posed by air pollution and has dire health implications for countries such as India, where pollution load is high and public health infrastructure underdeveloped. The Times of India. Read it on delhiair.org.