Beijing vs. Delhi: The Politics of Air Pollution: The Wall Street Journal (Blog posting by Elizabeth Gogoi, a Consultant based at Oxford Policy Management (OPM) Delhi) 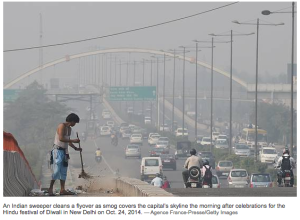 “India or China, whose capital city has the worse air quality? Of all the comparisons between the two Asian rivals, perhaps the most intriguing is also the hardest to draw. Faced with growing concern about the toxicity of Delhi’s air and suggestions than it was more polluted at times than smog-ridden Beijing, India’s government came up with a solution: take more air quality measurements.”

Elizabeth Gogoi points out that variations and differences in interpretation among the different AQI monitoring numbers and systems in Delhi “poses the risk of confusing the public, and perhaps diluting the message.” She notes that in Beijing “the expansion of monitoring and reporting systems has gone hand-in-hand with the increase in public protests about pollution.” However, “Delhi’s growing middle class shows no immediate signs of joining their Chinese counterparts in taking to the streets to protest against hazardous pollution. Nor are there signs that Delhites will follow Beijingers and don masks to protect themselves from pollutants.” However, she believes, “the growing network of monitoring systems should increase awareness on the scale of the problem, in turn prompting greater calls for accountability and ultimately, solutions.” The Wall Street Journal (Blog). Read it on delhiair.org.

Beijing vs. Delhi: The Politics of Air Pollution