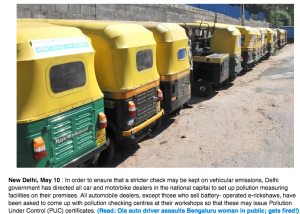 “Concerned by the rising air pollution levels in Delhi, the National Green Tribunal (NGT) recently put a ban on all petrol vehicles more than 15 years old and any diesel vehicles more than 10 years old. “At present, Delhi does not have sufficient numbers of PUC centres. The government has issued a direction asking all the city’s car and motorbike dealers to install pollution checking centres at their workshops,” said a senior government official. ‘The government wants to ensure that when motorists go to automobile workshops to service their vehicles, they can also get a check done there of the emission level,’ the official said. Dealers of e-rickshaws are exempt from the directive as the official said that such vehicles cause almost no pollution.” Press Trust of India. Read it on delhiair.org.