Exposure to air pollution in the first year of life increases risk for allergies: The University of British Columbia 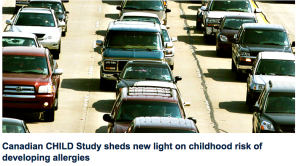 “New research from the Canadian Healthy Infant Longitudinal Development (CHILD) study shows that exposure to outdoor air pollution during the first year of life increases the risk of developing allergies to food, mould, pets and pests. The study, published in the journal Environmental Health Perspectives, showed that the sensitivity to allergens was associated with exposure to traffic-related air pollution during infancy. ‘With the increasing rates of allergies amongst children in Canada and elsewhere, we were interested in determining if air pollution from traffic might be partially responsible,’ said Michael Brauer, the study’s senior author and a professor in the School of Population and Public Health at the University of British Columbia. ‘This is the first study to find a link between air pollution and measured allergic sensitization during the first year.’” The University of British Columbia – Press Release. Read it on delhiair.org.