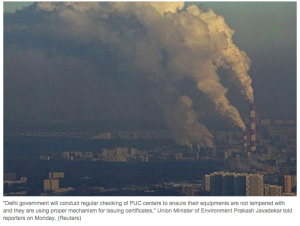 “Measures including strict action against visibly polluting vehicles and automatic identification of overloaded vehicles at the borders, are part of a three-month action plan devised today to deal with increasing air pollution inDelhi and NCR.In the meeting attended by environment ministers and officials of Delhi, Haryana, Uttar Pradesh and Rajasthan, the state governments proposed various measures to combat air pollution. Delhi government proposed to launch online monitoring system to map air polluting activities in the city by June.” The Financial Express. Read it on delhiair.org.