Environmentalists wary of India’s plan to intervene in publishing of smog data: The Guardian 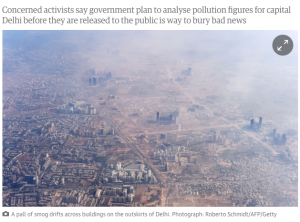 “Environmental activists expressed concern on Wednesday after Indian authorities said they would stop releasing raw air-pollution figures for Delhi, the world’s most polluted city. Three separate government agencies compile data from air-monitoring stations in the capital. Each publishes the figures directly.The government said late on Tuesday that the data should be sent to the Central Pollution Control Board for analysis before release in order to provide “authentic air quality information to people of Delhi”. It did not give a reason for the move, but several environmental campaigners expressed concerns that the new system, which comes into effect in the next two weeks, was a way for the government to bury bad news.” The Guardian. Read it on delhiair.org.