Concern in Rajha Sabha over rising air pollution in Delhi: The Times of India 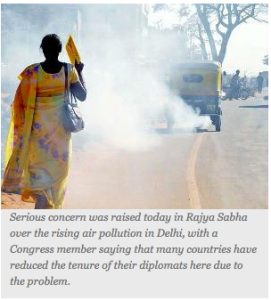 “Serious concern was raised today in Rajha Sabha [Council of States – Upper House of Parliament] over the rising air pollution in Delhi, with a Congress member saying that many countries have reduced the tenure of their diplomats here due to the problem. Observing the National Capital Region was one of the most polluted, Sanjay Singh (Congress) quoted a report of the Central Pollution Control Board (CPCB) to say that Delhi was topmost among 16 polluted cities in the country….”This is a dangerous situation, and if action was not taken in time, it could turn worse,” Singh said. The Times of India. Read it on delhiair.org.

Concern in Rajha Sabha over rising air pollution in Delhi